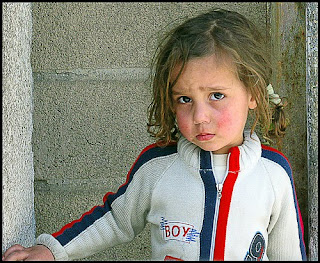 I was driving down a narrow street in Damascus near the Sha'alan district. I rolled down the windows on that cool eve and listened to a tune while the traffic came to a crawl. A little girl, just like this one in the picture, approached me with tears rolling down her face and a box of gum in hand asking me if I wanted to buy one. She couldn't have been over 7 years old. The sound of her sniffling while she shed the tears still haunts me to this day. Whoever sent her to do that, how could they? 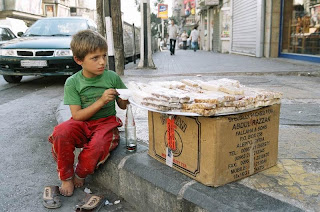 Everytime I stop at the light at Shahbandar square this little girl and her two younger brothers are standing there. She's around 10 years old, with dirty blond hair, wearing the same old rags day in and day out. She waits for the red light to do its magic and stop cars, then she approaches drivers trying to sell them candy, gum, or a piece of air freshner. One hot afternoon I was behind a row of cars at that light, and I saw her approach a man inside a nice beige new Mercedes. She knocked on the window offering her merchandise. The car door suddenly opened up with force knocking her along with her gum to the ground. Dressed in a black suit, he got out and kicked her while she was trying to get up then went back to his car as the light turned green. She tried to pick up her fallen goods, and was almost run over by him in the process while he was speeding off.

I come from Mariyah's blog.
Here in Lima, we have lots of children like the ones you describe here. People ignore them, sometimes they give them a coin or buy their goods. But I have never seen anyone reacting like this man.
When I see this kind of behavior, I feel enraged. My mom, the wisest person I know, prays for the violent person. But I don't think he deserves our prayers. Instead, I'll pray for the little girl and all the other children she represents.