The author of this post took the whole month of Ramadan off.

On being a Moderate Conservative

Well.... that's who I am. Although this post might seem like I owe someone an explanation, I sure don't. I wanted to do it for myself. I wanted to define who I am for my own sanity, morals, and believes. I will not mention any particular bloggs or bloggers. Living in Syria for the first half of my life made me a conservative, and spending the second half in the USA added the moderate tag to it. I do believe and practice my religion, not as good as I should, but my believes are firm. God knows, I had my shares of mistakes and sins. When you live in a foreign country for more than 20 years, you can't help sometimes but try to adjust and avoid being left alone or left out. This is in now way a justification for my mistakes. It's just an acknowledgement that I had my fair share of many. 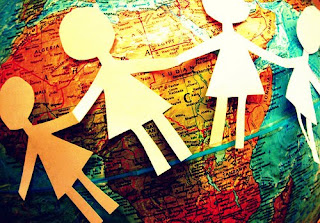 It's only logical for one to believe there's a higher power that controls everything. I look at the universe and how it's setup, and I'm constantly amazed at the perfection of our creator. How can anyone believe that this whole system started on it's own? The perfection of our bodies and minds, the perfection of our beautiful planet, and the amazingly vast skies and distant planets are enough clues. Walk to any beach, and stare far away at the endless sea, and think for a minute that despite all our technological advances we still haven't even discovered 1% of what goes on in the deep bottom of the oceans.

Where is the moderate part then? That part comes in play in accepting the fact that others think differently, dealing with those people in a normal and civilized way, and having a constructive relationship with them. Tolerance and acceptance are the keywords. God created us equal, and yet we all differ in many ways. I do accept the fact that many people have different religions and believes than mine. I respect all religions that make sense, specially the major three, Islam, Christianity, and Judism. These three main religions should always co-exist in peace and harmony. Unfortunately, this is never the case nowadays. Extremists from those three religions make life much more difficult for the majority of us, and they are destroying our world as we know it. Think of the world before September of 2001, and see how different it is now. Follow what goes on in the occupied palestinian land and how the palestinian children grow up looking at tanks destroying their houses, and machine guns killing their families, and imagine how they'll grow up and what mentality they'll have. All these acts are comitted against them by the only state ever founded on the basis of a religion. Acceptance also means respect. I think these religions should respect each other, specially the holidays and sacred days. When I was a kid I used to tag along with my father to his work sometimes. He had a Christian friend who worked in the same office. During Ramadan, that friend never ate or smoked in front of his muslim coworkers. This is the respect we need to give and expect. It's sad that some Syrian and Arab bloggers show no respect for this holy month and fill their blogs with offensive posts and statements. If you don't believe in some view, you can at least abstain from offending those who do. If you have nothing nice to say, say nothing.

My tolerence has no limits, yet my acceptance does not extend to everyone and everything. I do tolerate homosexuals. I have worked with, and still personally know some. I have no problem engaging in work or a friendly conversation or even an exchange of educated ideas and issues with them, but I will never accept their lifestyle as the norm. Nor will I accept it when they flaunt this lifestyle in my face in the purpose of trying to make our socities accept it in all its shapes and forms. How can we accept that two males or two females can start up up a normal family? Other than adopting from a product of a normal relationship, how can they ever have kids? Our human specis will seize to exist if this lifestyle was ever a norm or a majority. Even the most tolerating of parents are usually disappointed or shocked if they find out one of their kids is a homosexual. The "don't ask, don't tell" policy that president Clinton started concerning gays in the American military is the perfect solution for that institution. It just tells gays and lesbians that they will not be asked about their sexual orientation, and they shouldn't admit or flaunt their lifestyle among their fellow soldiers. I think this policy can apply to civil life too. Do not flaunt this in my face and expect me to take it for granted. I've seen Arab bloggers who loaded their bloggs with gay adjectives and even some disgusting pictures of semi-nude gay kissing and males holding dildos in their hands. Why talk about "Gay Pride"? Just be proud of who you are as a human being, and what good you do to your society and others. Ever heard of a straight person talking about "Straight Pride". It just makes no sense. Why throw your sexual orientation and preferences in the middle of every cause? Why wouldn't I just shut up and say nothing like I stated in my last paragraph? It's because those acts offend me and many others deeply, and I'm not being offensive or promoting any hatred campaign.

Saying all that, I will not hate. Hate is a very strong word that I don't use lightly. 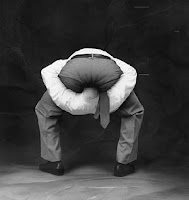 lead to lonliness and even suicide in some cases.
4. Holding those gases inside without a realease leads them to travel up all the way inside the human body to the brain. This trip and the final destination are reasons for catastrphic results. Shi**y ideas and outrageous trains of thoughts are results of these gases residing in the brain. This post was the result of such fumes journey to the brain. The author consumed a large dish of fava beans mixed with chickpeas, olive oil, lemon, and garlic. You are being subjected to reading the sad results in this case. I'm sure many politicians, planners, and executives come up with ideas after such consumption. This is the major source of wars, bad economies, and bankruptcy in our part of the world.
I'm sure there are many other problems and results that will never be tackled. Rememeber the movie The Silence of the Lambs? Dr. Hannibal Lecter told Clarice that he ate one of his victims liver with some fava beans. Could the beans have caused his canibalism in that case? We may never know.
Please join me in boycotting these ingredients and finding a safer alternative.
Posted by أنا سوري at 11:46 AM 7 comments: 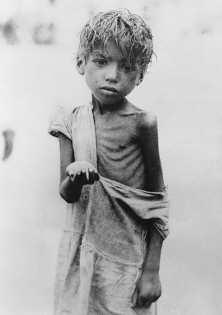 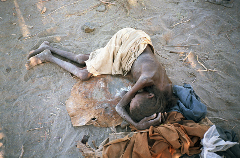 Let us not forget that while we sit around our daily Ramadan tables there are still people suffering and dying of famine. 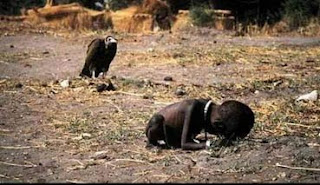 This picture above of a vulture waiting for a child to die of hunger was taken in Southern Sudan in 1994. It won the Pulitzer prize for that year.
While this feast in the picture below was taking place at the other side of the Red Sea.
How many children do you think this dish would've fed? 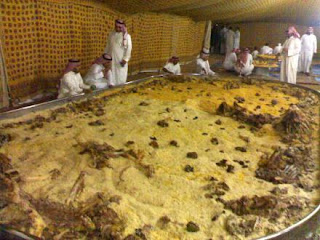