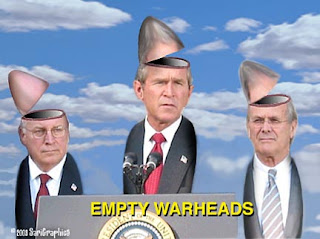 This is probably the only time you'll read a post here about politics or a politician. I hate politics with a passion, and I hate politicians even more. The world has enough crooks and thieves for us to bring more and hand them a public office. But, this is how socities run. It's a necessay evil.
Say what you want about the USA, but this country is home to countless ethnic groups and nationalities. There is not another country that has that many immigrants prospering and making a decent living. I personally have worked with Americans and foreigners alike since I came here in 1988. I've been treated like a family memeber by many Americans and have blended in smoothly. This country has been, and will be for a long time, my second home. I've been treated nicely because I showed respect as a guest by speaking the language, and working hard legally, something that some immigrants unfortunately fail to do.

I'm here to talk about only one idiot in particular. His name is George W Bush. Bushie, the liar, Dubya (Funny pronounciation of the W in his name), baby Bush, Boy George, Bush Lite, Bushollini, George Wrong Bush, Giggling Murderer, The Little Turd from Crawford, the Little man in the Big chair, and War Chimp are some of his many nicknames. He reigned this country for 8 years, and destroyed the world in the process. An ex alcoholic and drug user who had no qualifications whatsoever to run a small town, nevermind the United States of America, except for his father's money and influence. The whole world hated the US, including its closest allies, while Dubya practiced his cowboy ways of starting wars and killing civilians. Civil liberties were violated in the country that created them. Innocent people were arrested and jailed without a court order for stupid reasons like mistaken identity.
You don't need me to tell you what Dubya did. The whole world knows. It might be a little bit late, but I'm just here to say this: Goodbye Dubya, and good riddance. يا دب يا
Posted by أنا سوري at 8:48 PM

My feelings toward the US mirror yours completely.

As for George W Bush I'm afraid we are on different wave length.

I HATE THE SONOFABITCH much more than you do.
Good Riddance motherf....r

Could not find a suitable section so I written here, how to become a moderator for your forum, that need for this?

Anonymous:
I don't understand what exactly you want man.

Polyethylene is often utilized in both excessive density and low density variations for merchandise starting from plastic bags and movies to beverage containers. The operate of the clamping unit is opening and shutting a die, and the ejection of components. There are two types of clamping methods - a toggle sort shown and the straight-hydraulic sort, which permits a mildew to directly open and shut with a hydraulic cylinder. Insert molding requires intensive experience in effective methods of holding the insert in best elongated toilet seat the mildew persistently underneath the excessive heat and pressure that occurs during molding.