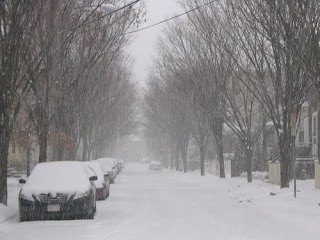 Six weeks after settling down in Maryland, the Wahington DC metro area, I saw my first snow storm in 6 years. Since childhood, this white fluffy substance had the most wonderful effect on me. Everything looks so peaceful and toned while covered with layers of snow. Except for the noise of some cars spalshing melted snow to the side of the road, it seemed someone hit the mute button on all the other sounds and chose to redraw the world as we know it in plain white. Such a picturesque scene sends quiet waves of calmness over most people. Everything starts to move slowly, and we seem to forget the never ending rush we're always in. 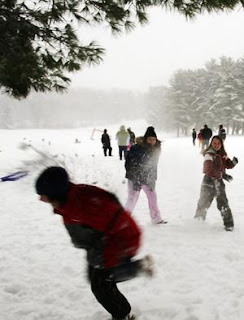 It used to snow in Damascus at least once or twice a year when I was a kid. The happiest days were the ones I woke up with snow blanketing the streets outside. Deressed heavily and ready for battle, we used to go outside and play with the snow. Those white tender balls flowing out of our hands onto each other and unsuspecting passers. Such innocent joy came upon us when one of our balls hit an intended target and we instantly see the sometimes angry, other times pleasantly surprised expressions of our victims. Heavy snow days meant an instant day off from school and all other activities. They meant play and pleasure all day long.
Following my teens, I moved to Boston. Although snow was and still is plentiful there, it always brought me back to those happy days as a kid. An american girl I used to date got me into the art of snow man making, and donuts. Making donuts refers to driving a car fast in circles during a snow storm in the parking lot of a mall or a big shopping centers, and leaving marks all over that look like donuts. We just looked for empty parking lots, hit the gas, turned the wheel all the way, and skid around in circles. I even tried skiing a few times in the mountains of New Hampshire. Mountain skiing is the ultimate sport. If you think you're going to just slide and skid on the snow without any effort, you're in for a shock. Skiing takes alot of effort and athletic ability, and it drains your energy quicker than any sport. It's pure fun.
Living in the south for the past six years, I rarely saw any traces of snow. Maybe less than an inch once. Despite the fact I'm not a kid, neither a teenager anymore, I still get that childish, innocent, and fun feeling everytime the snow man drops by for a visit.
Posted by أنا سوري at 12:26 AM